Home Insights Get To Know Us: Tom Hemmendinger Paddles Cross Country, One State At A Time 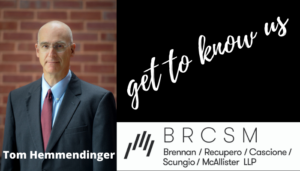 Tom Hemmendinger has a national reputation as a talented commercial finance and insolvency attorney. But Tom has plenty of little-known talents that span both land and sea.

Tom has been an avid kayaker for many years. Recently, he challenged himself to paddle in every state in the country. In the last four years, he and his inflatable kayak have had water-based side-bars, coinciding with business trips, in almost half of the United States and one Canadian province.

Tom also has a 26-foot sailboat and is a longtime sailor in  Narragansett Bay; in fact, he completed a course in celestial navigation in 2014 to expand his navigation skills.

Tom on the Colorado River in Utah in his inflatable kayak in 2016.

Beyond his adventures on the water, Tom and his wife Ellen have a passion for restoring the grounds of their 1754 farmhouse in Hope, Rhode Island, where they’ve raised their two children, Anna and Sam, and two generations of Labrador Retrievers.

The former working farm had some remnants of the original fruit trees and landscaped grounds when they moved in over three decades ago. Together, they restored the stone fences, built retaining walls, cleared woods, replaced trees, and expanded the gardens with planted wildflowers and perennials.

They find this work especially uplifting during the pandemic. “It’s good for the soul,” Tom explains.

Reach out to Tom via email and connect with him on LinkedIn.